Sound Card selection. The following Sound Cards are supported on the build: SGTL (In-board Audio Codec for PicoPi) 2-Mic Conexant; The script will prompt if you are going to use the Conexant Card. If not then SGTL will be assumed as your selection. Are you going to use Conexant Sound Card Y/N? Install Alexa SDK.

Our Embedded Linux BSPs use the regular Linux audio subsystem Advanced Linux Sound Architecture (ALSA). The ALSA subsystem can be configured using amixer or alsamixer whereas playing and recording is possible using the ALSA utilities aplay and arecord. Higher-level frameworks such as GStreamer allow to convert audio streams (e.g. sample rate) and play/record encoded audio streams such as MP3, FLAC, or Ogg/Vorbis file formats. This article provides some example commands showing how to control and use audio with a Toradex Embedded Linux BSP.

You can use the speaker-test to test audio, or alternatively aplay if you have an audio file deployed to the board. See a simple example below.

In the example above, sgtl5000audio, the interface number 2, is the one connected to the headphone jack available on our carrier board. We'll use it. It may vary depending on your SoM; if you have questions, jump to the section specific to your SoM!

First, unmute the interface and adjust the volume: 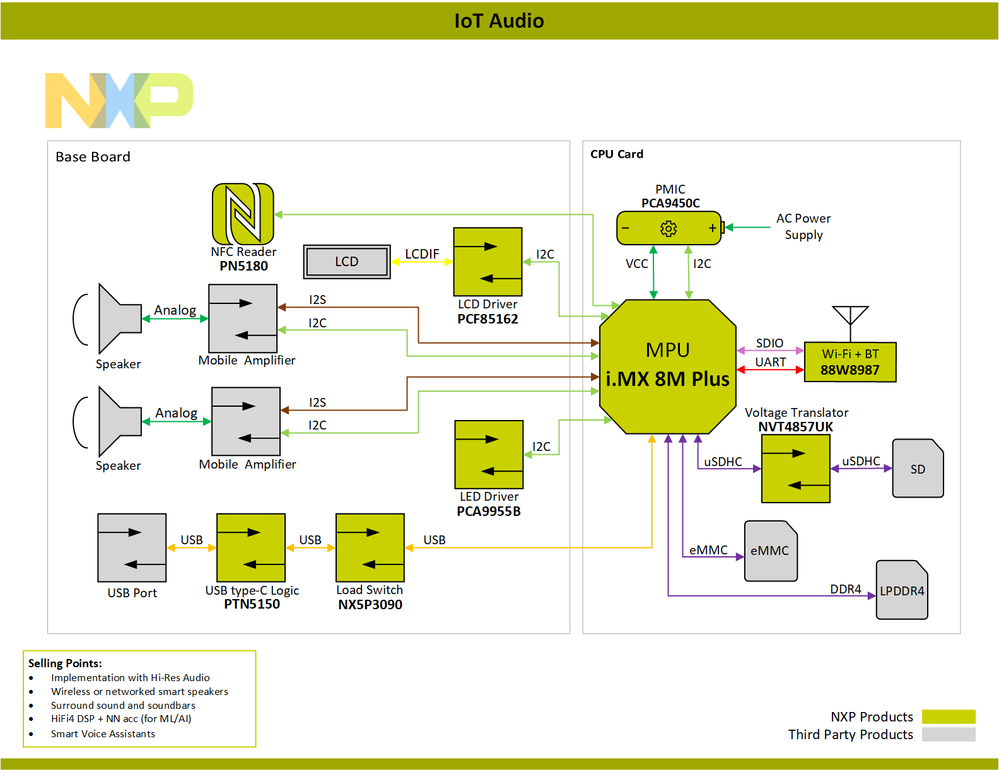 Then, play a test sound:

Or, if you have a wave file on the board, for instance we'll use Gong.wav:

The Colibri T20 modules have a Wolfson WM9715L audio codec on board. To find pin assignment refer to the Hardware reference.

Please note that not all pixel clock frequencies allow for HDA being streamed through HDMI. E.g. at VESA VGA resolution you may get an error reported as follows:

Plus the number of available channels depends on the resp. HDMI device is connected to.

The Colibri T20 provides SPDIF signals and Audio through HDMI.

Please note that not all pixel clock frequencies allow for SPDIF being streamed through HDMI. E.g. at VESA VGA resolution you may get an error reported as follows:

The following example shows how to playback MP3 audio via GStreamer using hardware-accelerated MP3 decoding. Please note that the two numbers at the end specify which ALSA card and device to use for audio (e.g. alsasink device=hw:0,0 for WM9715L AC97 through headphones and alsasink device=hw:1,0 for SPDIF through HDMI).

HW accelerated decoding and encoding are provided by GStreamer plugins.

The SGTL5000 is the default sound device, thus one does not need to specify it explicitly on the command line.

Playback of a wave file:

Change the input channel to MIC_IN:

In contrast to Line-in, Microphone capture is mono anyway, hence we can save some space by only recording one channel. The argument -V offers a VU meter which helps to see whether there is any input and if its volume is at a reasonable level.

Apalis features dedicated SPDIF pins and the Apalis Evaluation board provides an Optical Transmitter. Thus the Apalis iMX6 image has the SPDIF feature enabled in our default device tree, while for the Colibri iMX6 and Colibri iMX7 it is not enabled.

In addition to the video data stream, HDMI is able to carry audio data as well.Note that depending on the video resolution/framerate used, that feature might not be available.HDMI Playback is currently unavailable for Colibri i.MX7.

Additional GStreamer pipelines can be found on the Freescale community website here.

Additional encoders and decoders can be verified with GStreamer command gst-inspect.

Alternatively, using the playbin plugin, which sets up the pipeline automatically:

To record and encode to MP3, the following GStreamer command can be used:

The Colibri iMX6ULL does not feature an audio codec on the module. However, it is possible to access all three audio interfaces placing an external audio codec.

However, the Colibri iMX6ULL features a Medium Quality Sound (MQS) interface that can be used to generate medium quality audio via a standard GPIO. Please refer to the module datasheet for more information.

Note: This section currently only applies to Apalis iMX8

The Verdin iMX8M Mini does not feature an audio codec on the module. However, it is possible to access all Synchronous Audio Interfaces (SAI) placing an external audio codec. The SAI interfaces can beused as I2S (Recommended) or AC97. An I2S is connected to the Wi-Fi module for Bluetooth audio features. Please refer to the module datasheet for more information.

Verdin Development Board and Dahlia Carrier Board features an analog audio interface based on the WM8904CGEFL/RV audio codec IC from Cirrus Logic.

To check the available sound cards, use the cat /proc/asound/cards command. The expected result on a Verdin iMX8MM:

To record audio, you might need to run the following command to unmute the capture device:

Within the Vybrid module family, only Colibri VF61 supports analog audio. Audio is handled by the onboard Wolfson WM9715L audio codec connected via a AC97 audio link to the Vybrid SoC. The audio codec driver is called wm9712-codec, since it was initially created for the almost identical WM9712L codec.

Playback of a WAVE file:

Note: Some parts of the AC97 protocol are realized in software. To make Software AC97 efficient, a rather large buffer is used to prepare several AC97 frames in a batch. However, using buffering does not allow the use of the variable sample rate (VRA) feature of the AC97 link during playback since that would require a response that depends on the request flag of the last received frame. Therefore, the hardware is only able to transfer 48kHz sample rate PCM streams. The ALSA audio stack is able to re-sample the sample rate dynamically, the only difference is that a file with a sample rate other than 48kHz requires somewhat more CPU resources while playback (<1% vs ~3%). Implementing the AC97 protocol without buffering would lead to a much higher CPU load than relying on ALSA's re-sampling feature.

The hardware parameter of the PCM stream during playback can be seen via the proc file system:

Playback of encoded audio formats can be achieved using GStreamer. The Colibri VF61 root filesystem does not provide GStreamer by default, however it is installable via Angstrom feeds:

The WM9715L has two audio ADCs hence allowing stereo audio capture. The input to these capture ADCS can be individually selected through the ALSA Capture Select controls. Capture volume and boost are handled after the channel selection, hence the volume applies for the Microphone as well as for Line-In capturing.

The record volume can then be set to a value between 0-63 (which mappings linearly to the gain ranges above).

Depending on the input (e.g. microphones) a boost might be necessary to increase the ADC signal by +20dB.

Stereo capture can be achieved using Line-in functionality. First, the 'Capture Select' needs to be selected correctly in ALSA mixer:

To record the Ogg Vorbis audio format, the following GStreamer command can be used

The Colibri standard has only one microphone input, which is connected to Mic 1 of the audio codec. The codec internally samples the same signal with both ADCs, hence the ALSA stack receives a stereo signal. However, since the signals are the same, we can save some space by only recording one channel. The argument -V offers a VU meter which helps to see whether there is any input and if its volume is on a reasonable level.

CONFIG_SND_USB_AUDIO is enabled, so you may use USB audio hardware.
If you get the following error when recording from USB, enable the CONFIG_USB_EHCI_TT_NEWSCHED kernel configuration.