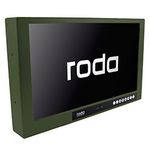 Roda Computer GmbH with its head office in 77839 Lichtenau / GERMANY was founded in 1987 and was renamed in April 2012. Since the beginning specialised in development, assembly and distribution of mobile PCs, 1995 roda focussed it's activities on RUGGEDIZED mobile PC systems.