According to the company, the cards—which were developed in partnership with Samsung and Cyberlink—will feature global reception and will eliminate the need for any external connections when watching or recording mobile television. The card supports “mobile TV,” or the DVB-H, DVB-T, DAB, DAB-IP and T-DMB mobile standards.

Instead of manually affixing antennas to the card, the SuwonExpress will come with built-in antennas that are embedded inside the ExpressCard slot, said Alon Ironi, Siano’s CEO.

The Personal Computer Memory Card International Association (PCMCIA) introduced the ExpressCard in 2003, and since then, it has largely become the standard hardware replacing CardBus PC cards.

Hewlett-Packard began shipping systems with ExpressCard in November of 2004, and Lenovo followed shortly thereafter, integrating the slot into its ThinkPad T43 in 2005. 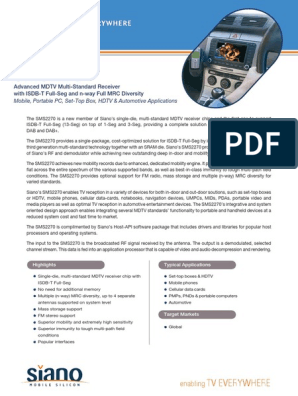 Ironi said that Siano, while only responsible for contributing the chips for the card, expects the SuwonExpress to hit the retail space within a next year and that the company has already demonstrated the technology to a few OEMs.

“We’re a chipmaker so we’re mainly targeting notebook makers and accessory card retailers,” said Ironi. “We’ll be demonstrating the technology more between now and CES and I would assume it would be ready in the spring or summer of ’07.”

Based on Siano’s MDTV receiver chipset, the SMS1000, the SuwonExpress will come bundled with multi-standard software suite from Cyberlink, including an electronic service guide, a TV player, and a recorder.

Cyberlink says it will offer the SuwonExpress as part of its Windows XP, Windows Vista, and Linux application software bundle packages.

Following Tuesday’s news that Intel will be releasing UMPC and MID platforms based on its 45-nm, high-k low power microarchitecture, Siano announced on Wednesday that it has signed an exclusive deal with the chipmaker to provide its SMS1000 multi-standard TV receiver chips to help power those platforms.

Siano, an Israeli company that makes silicon receivers for the mobile television market, said that its quad-band SMS1000 receiver supports multiple mobile standards, such as DVB-H, DVB-T, DAB, DAB-IP, and T-DMB, and can operate in various spectrum ranges (from 170MHz up to 1680MHz), making it truly international.

Siano also says that its low power receivers will let consumers watch mobile television on various MID devices for anywhere between 8 to 20 hours, depending on the broadcast technology.

Today’s announcement by Siano also seems to be in keeping with the news coming out of Beijing this week, where Intel is emphasizing the importance (and continued growth) of mobile computing.

Yesterday, during various IDF keynotes, Intel executives reiterated that they believe personalization and content will be the key drivers behind increased demand for notebook PCs and mobile Internet devices.

Intel’s senior vice president and general manager if its Mobility Group, David Perlmutter, was quoted as saying that “the Internet is one of the driving forces in today’s PC market and there is a continued desire for the Internet to be mobile.”

“Intel is serving the market today with notebook PCs, and will expand its reach by adding WiMax to notebooks as well as small form factor MIDs in 2008,” Perlmutter continued.

Late last year, Siano announced the launch of the SuwonExpress, an ExpressCard accessory designed to bring mobile digital television (MDTV) to notebooks. Those cards, which will also support the DVB-H, DVB-T, DAB, DAB-IP and T-DMB mobile TV standards, were developed in partnership with Samsung and Cyberlink, with Siano responsible for contributing the chips for the card.